Chocolate Chip Brioche Bread Pudding is a rich and decadent dessert that will satisfy your sweet tooth. Its custard-like texture is punctuated by gobs of melted chocolate making every bite simply heavenly.

It can be enjoyed warmed up by itself or accompanied with Easy Homemade Whipped Cream and fresh berries or a scoop of ice cream. This easy chocolate bread pudding recipe is a perfect way to use stale bread and takes under 90 minutes to make.

How to Upcycle Stale Bread

We've all had a loaf of bread that sat in the refrigerator too long or a baguette that dried out before we could finish it. Luckily, breathing new life into stale bread is a deliciously easy thing to do! Many noteworthy dishes call for stale bread including Crispy Panzanella, rich Thanksgiving stuffing, and Brioche French Toast! All of these incredible dishes call for some good old stale bread.

One of my favorite ways to employ stale bread is by making chocolate bread pudding. We often buy a loaf of brioche from Trader Joe's that we can never finish before it goes stale. Instead of throwing the bread out, we turn it into Chocolate Chip Brioche Bread Pudding. We toast the brioche before we pour the custard on top to add more texture and we spread the chocolate chips over everything so every bite feels like your first. The brioche soaks up the custard mixture like a sponge and the pudding turns out smooth and creamy.

Chocolate Chip Brioche Bread Pudding is a great weeknight dessert to make. You can even top it with some fresh berries, whipped cream, or vanilla ice cream.

Chocolate Chip Brioche Bread Pudding has a custardy texture, with bits of crunch and chewiness from the toasted bread. It also has notes of vanilla, cinnamon, and melted chocolate. Brioche bread pudding tastes similar to French toast, in that it is also a custardy treat that can be topped with berries and Easy 2-Ingredient Whipped Cream.

The rich and creamy texture of bread pudding is attributed to the type of dairy you use. We recommend using milk with high-fat content, such as whole milk, heavy cream, or half and half. In fact, milk with a fat content lower than that of whole milk will not be creamy enough, resulting in dryer, less rich bread pudding.

While this is a dessert, Chocolate Chip Brioche Bread Pudding is not overly sweet. It calls for just a quarter cup of sugar, allowing the hints of vanilla, cinnamon, and sweet chocolate chips to shine. When combined, these ingredients make for a deliciously creamy, textured bread pudding you can enjoy for both dessert and brunch.

Chocolate Chip Brioche Bread Pudding is incredibly approachable and easy to make. It's honestly difficult to make a mistake when making this recipe, so it's perfect for a beginner baker or someone who wants a quick and delicious dessert.

Chocolate Chip Brioche Bread Pudding requires just a few kitchen essentials, all of which you can use for many other common recipes. To make bread pudding, you will need a baking sheet, whisk, saucepan, pie dish, measuring cups, measuring spoons, and sifter.

How to Store and Reheat Bread Pudding

Bread pudding can be stored in an air-tight container or covered with foil for up to 2 days in a refrigerator, as milk and eggs can spoil at room temperature. If by the second day, the bread pudding is dry, you can add a splash of cream, or top with ice cream or whipped cream to make it moist again.

To reheat bread pudding, heat the oven to 300° F and warm the leftovers in the oven for 5 minutes.

How to Freeze Bread Pudding

You can freeze bread pudding to have on hand for future dessert needs. Frozen Chocolate Chip Brioche Bread Pudding can be baked ahead of time and kept in the freezer for up to 2 months.

When you are ready to eat the bread pudding, thaw the dish in the refrigerator overnight. The next day, make sure the bread pudding is completely thawed. To reheat the entire dish, heat the oven to 300 degrees F and warm the leftovers in the oven for 5-8 minutes.

Use high quality chocolate chips, chocolate chunks, or chop your own baking chocolate to ensure that the chocolate flavor is rich.

If you enjoyed this recipe, please rate and comment below! For more recipes like Chocolate Chip Brioche Bread Pudding, check out: 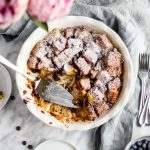 Chocolate Chip Brioche Bread Pudding is a rich and decadent dessert that will satisfy your sweet tooth. Its custard like texture is punctuated by gobs of melted chocolate. It can be enjoyed warmed up by itself or accompanied with whipped cream and fresh berries or a scoop of ice cream. This easy bread pudding recipe is a perfect use for stale bread and can be made in under 90 minutes.
Prep Time20 mins
Cook Time1 hr
Total Time1 hr 20 mins
Course: Brunch, Dessert, Sweets
Cuisine: American
Servings: 8
Calories: 245kcal
Author: Kathleen Higashiyama

Kat Higashiyama and Alec Totto are recipe developers, food photographers, and the authors behind The Heirloom Pantry. Since 2017, they have shared recipes inspired by their Japanese and Italian heritage and California and Hawaii roots. They reside in San Jose with their two dogs, Peeps and Paisley. Read More…

This site uses Akismet to reduce spam. Learn how your comment data is processed. 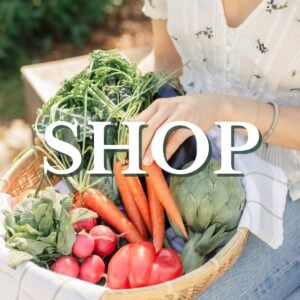